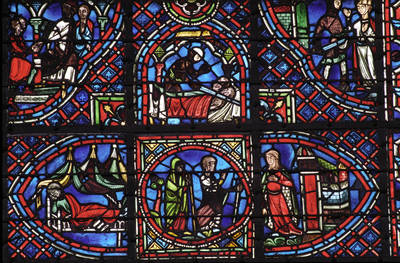 Top left: Julian returning from war. Top center: Julian sees his parents in the master bedroom, but mistakenly assumes it is his wife who is cheating and he kills them. Top right: Leaving the bedroom, Julian meets his wife who tells him the truth. The deer's prophesy is fulfilled when his wife tells him the true story. Bottom left: In a military camp composed of tents, Julian rests under his tent. Bottom center: The parents of Julian, worried by his disappearance go to look for him. Bottom right: Arriving at the castle in Julian's absence (he has gone hunting), they are welcomed by his wife.