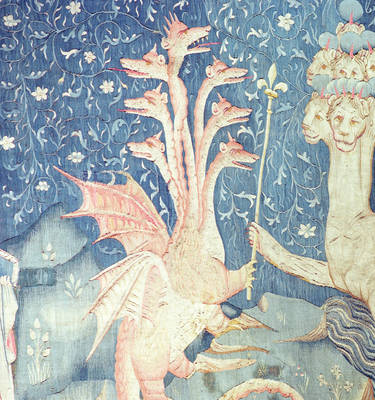 And I saw a beast rising out of the sea, with ten horns and seven heads, with ten diadems upon its horns and a blasphemous name upon its heads. And the beast that I saw was like a leopard, its feet were like a bear's, and its mouth was like a lion's mouth. And to it the dragon gave his power and his throne and great authority."" (Revelations 13:1-2).ote that the symbol the dragon gives the beast bears the fleur-de-lis, an explicit reference to the passing of French power to the English. Apocalypse Tapestry, Chateau d'Angers, earliest surviving warp tapestry, originally depicted the entire story of the Apocalypse. Each tapestry consisted of seven wall hangings showing seated figures and fourteen panels (alternating red and blue backgrounds) illustrating a verse from Revelations. 1375-1382