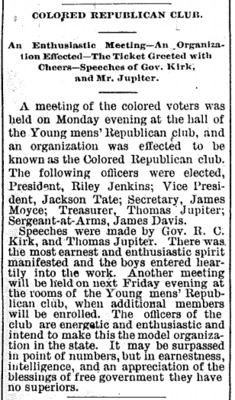 Speeches were made by Gov. R.C. Kirk, and Thomas Jupiter. There was the most earnest and enthusiastic spirit manifested and the boys entered heartily into the work. Another meeting will be held on next Friday evening at the rooms of the Young men's Republican club, when additional members will be enrolled. The officers of the club are energetic and enthusiastic and intend to make this the model organization in the state. It may be surpassed in point of numbers, but in earnestness, intelligence, and an appreciation of the blessings of free government they have no superiors.