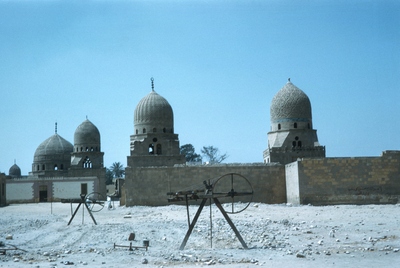 "Stretching for some six kilometers on either side of the Citadel are the great cemeteries of Cairo. To the casual visitor coming in from the airport via the Citadel road, the Northern Cemetery, lying at the foot of the Muqattam Hills, seems cluttered and dusty, a jumble of buildings and satellite discs with interspersed domes rising up among them ... The Northern Cemetery is often wrongly called the ‘tombs of the caliphs.’ The Abbasid caliphs were buried in the great Southern Cemetery below Ibn Tulun’s Mosque, while the Fatimid caliphs were buried in the Eastern Palace of al-Qahira. This cemetery was developed primarily in the fourteenth and fifteenth centuries, and it contains the tombs of the Mamluks." (Williams, 232-3) (Source: Williams, Caroline. Islamic Monuments in Cairo: The Practical Guide. The American University in Cairo, 2002.)