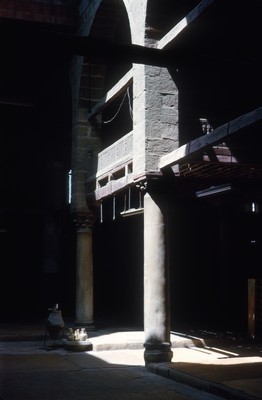 An elevated arcade resting on columns inside the Mosque of al-Fakahani ('fruit-sellers's'). It is "attributed to the Fatimid caliph al-Zahir in 1148. Of the original mosque it is the site, the basic plan, twelve reused marble columns, and most notably, the arabesque panels of the main doors that survive. These panels are in situ remnants of late Fatimid period woodwork ... Jonathan Bloom has established the chronology of interventions made to the structure over the centuries: after the 1303 earthquake, again in the fifteenth century, in the sixteenth century when the minaret was added, and finally, and most decisively, in 1736, when it was rebuilt by Ahmad Katkhuda al-Kharbutli, an officer of the Janissary corps. The visible result is this small Ottoman Cairene congregational mosque, whose continuity of almost a thousand years gives it manifest historical relevance" (164). (Source: Williams, Caroline. Islamic Monuments in Cairo: The Practical Guide. The American University in Cairo, 2002.)