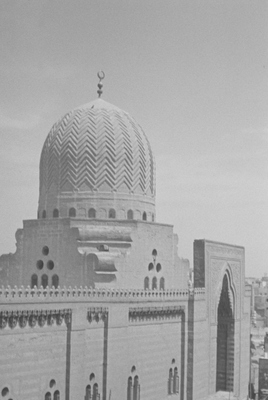 The dome and entrance portal of the Mosque–Mausoleum of Sultan al-Mu’ayyad Shaykh, located next to the Bab Zuwayla (see B50.047). "Al-Mu’ayyad Shaykh, a Burgi, or Circassian, Mamluk, was sultan from 1412 to 1421" (160). He "spent forty thousand dinars on its construction. Due to the sultan’s lavish endowments, the madrasa became one of the prominent academic institutions of the fifteenth century. A large library was collected; the most eminent scholars of the day filled professorial chairs; and the most famous specialist in Qur’anic exegesis in Egypt, Ibn Hagar al‘Asqalani, was installed as lecturer in Shafi‘i jurisprudence" (160). "The elevated portal [partially visible in this image], with its red and turquoise geometric frame around the door, carved arabesque patterns around the hood, and nine-tiered stalactite fall are particularly beautiful. The panels on either side, in square Kufic script, are arrangements of the shahada , the first pillar of Islam: “There is no god but God; Muhammad is the messenger of God.” The magnificent bronze door originally belonged to the Madrasa of Sultan Hasan and was purchased for five hundred dinars, a relatively paltry sum" (160-1). (Source: Williams, Caroline. Islamic Monuments in Cairo: The Practical Guide. The American University in Cairo, 2002.)