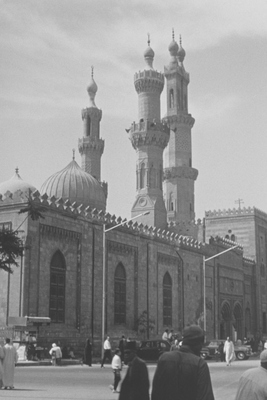 The façade of the ancient Al-Azhar mosque and madrasah in Cairo. "The Mosque of al-Azhar was founded by Jawhar al-Siqilly, the Fatimid conqueror of Egypt, in 970 as the congregational mosque for the new city of al-Qahira. The first khutba was delivered from its minbar in 972 and a university was established there in 988. The original structure is a hypostyle mosque, with the aisles defined by round arches on pre-Islamic marble columns (spolia) with Corinthian capitals, and with the axis to the mihrab emphasized by a wide longitudinal aisle (transept), higher than the rest of the prayer hall. The other aisles are transverse, running parallel to the qibla wall. The termination of the transept at the mihrab is marked by a dome." (Source: “Jami' al-Azhar.” Archnet, archnet.org/sites/2311/. Accessed 21 Sept. 2017.)