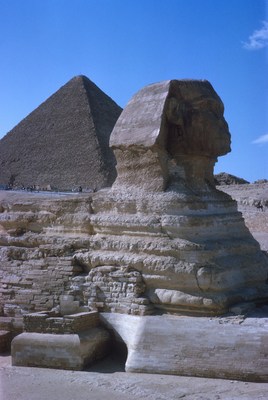 The famous and mysterious Sphinx of Giza, situated in front of the Second Pyramid. This picture has been taken from the side, and so the Great Pyramid (of Khufu) is visible in the background. "The Sphinx is synonymous with mystery. Until 1926 the great statue was buried up to its neck in sand, and visitors speculated about what might lie underneath. Today the archeologist can assure us that the Sphinx, freed from sand and surrounded by ruins, dates from the reign of Khafre, the builder of the Second Pyramid (see B05.008). He will admit, however, that more excavation is needed before we can be certain that the sands hide nothing more" (Fakhry, 157). "Over 20 meters high and 57 meters long, the Sphinx was originally carved from the living rock without additional masonry. Because of the softness of the stone, its body and paws became eroded with time and countless sandstorms, and from time to time later rulers repaired it with stone blocks. The figure faces the rising sun. Its form is simple and the pose majestic; the face, framed by the royal nemes-headdress, is an idealized portrait of Khafre himself" (Fakhry, 158). (Source: Fakhry, Ahmed. The Pyramids. Chicago and London: The University of Chicago Press, 1969.)