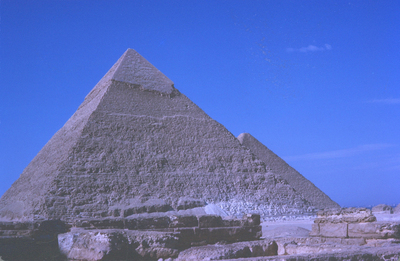 "The Second Pyramid at Giza … built by Khafre, another son of Khufu, has the most completely preserved complex of the Giza group" (Fakhry, 132). "The Second Pyramid was surrounded on the north, south, and west by a temenos wall, parts of which are still visible. West of the wall are ruined parallel walls built of rough stones. They are divided by partitions into 110 small rooms, which Petrie [Sir William Matthew Flinders Petrie; very famous English Egyptologist] believed were barracks for the workmen who built the pyramids. He estimated that they could have housed between 3,500 and 4,000 workmen. Khafre's pyramid was one of the last to lose its casing. It retains some at the summit, and, although the once-white limestone has weathered to shades of brown and mauve, the stones still retain some of their high polish. At night they reflect the white light of the moon ... Originally the pyramid was 143.5 meters high and 215.5 meters square, with a slope of 53°10'" (Fakhry, 137). (Source: Fakhry, Ahmed. The Pyramids. Chicago and London: The University of Chicago Press, 1969.)