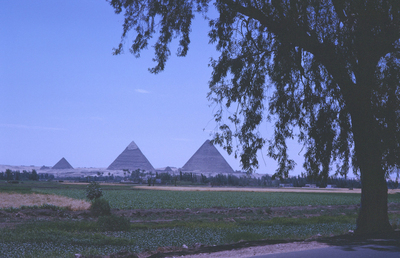 Distant view of the three pyramids at Giza, "the supreme Egyptian response to the vast landscape and the pharaonic will to immortality. Nothing that followed could match their immense geometric massings, square in plan, each side a perfect triangle facing one of the cardinal points of the compass, their surface of smooth limestone (long since stripped away) glistening in the sun. The apex of each pyramid was capped with a sheath of gold (the first of its treasures to fall prey to the greed of later times); at the core was the venerated body of the pharaoh, for whom the outer shape provided a "ladder" for his ascent to the sun ... The pyramids are not aligned frontally with respect to one another, but diagonally along the projection of the northeast-southwest diagonal of the Great Pyramid, with some displacement in the case of Menkure's. Were they aligned frontally, their relative sizes would be inescapably apparent. In their actual relationship—most perfectly perceived in th westward approach from the Nile—their relative dimensions are ambiguous due to the visual incommensurability of their distances from one another. And because the pyramids decrease in size as they increase in distance from the observer, the apparent distances are greater greater than the actual, making the site seem even vaster than it is." (Source: Marvin Trachtenberg and Isabelle Hyman, Architecture, from Prehistory to post-Modernism: The Western Tradition (Englewood Cliffs, NJ: Prentice-Hall, 1986), 58).