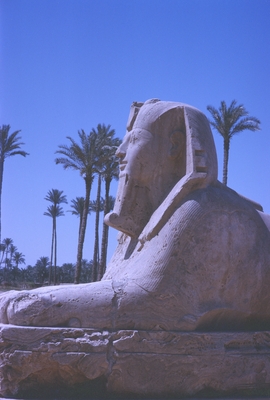 "The alabaster sphinx recently [i.e. in 1912] discovered near Memphis, is believed to be the largest object carved out of a single block of alabaster in the world … The discovery of the alabaster sphinx was made last year, when, on the marshy plains of Memphis, on the road to Sakkareh, a member of the British school in Egypt found a curiously carved object sticking out of a sand embankment. The season was so far advanced that nothing could then be done, but this year the excavators went to work, and the object was found to be the tail of a sphinx. The sphinx, on being dug out, proved to weigh ninety tons, and to be carved from a single piece of alabaster. The monster measures some 14 feet in height and 26 feet in length. Alabaster as the largest that has been transplanted. This figure bears no inscription, but is considered by Prof. Flinders Petrie to have been carved about 1300 B. C. It is therefore almost contemporraneous with the Seti sarcophagus." [Source: Davis, Chas. H. S. "Archaelogical Notes." The American Antiquarian and Oriental Journal XXXIV (January 1912): 235. Accessed April 28, 2017. https://books.google.com/books?id=X8kaAAAAYAAJ&pg=PA235&dq=what#v=onepage&q=what&f=false.]