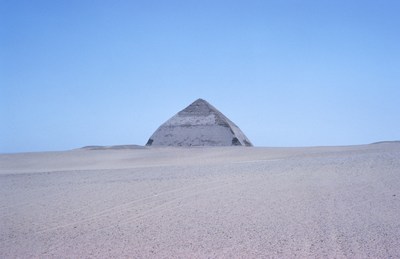 A distant view of the famous Bent Pyramid of Sneferu, the first pharaoh of the fourth ancient Egyptian dynasty, situated in the royal necropolis of Dahshur. "The Bent Pyramid was planned from the beginning as a true pyramid, with its sides measuring 188.6 metres and with an original height of 101 metres. Its stone casing is the best preserved of all the pyramids of Egypt. The angle of the slope is 54° 31' 13" up to a height of 49 metres, and then it becomes 43° 21'. The change of the sloping angle gives it its name of the Bent Pyramid. Archaeologists explain the change in the sloping angle by speculating that it was too steep continue, and the centre of weight of the core masonry stones would have made the structure unsound. Another explanation is that the builders may have felt that the stone casing was unstable and would fall out. Whatsoever, cracks were discovered in the passage leading to the upper burial chamber. The builders tried to repair the damage by filling it with plaster. This might have been a strong reason for the builders to reduce the pyramid's slope. This modification resulted in reducing the weight of the upper part of the pyramid, thereby reducing the load on the chambers and passages that had started to crack." -MA (Source: Farid S. Atiya, Ancient Egypt (Giza, Egypt: Farid Atiya Press, 2006), 127.)