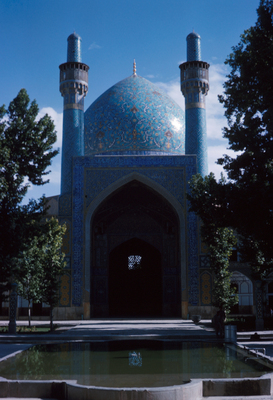 View of the south iwan and the sanctuary dome of the Chaharbagh Madrasa, also called the Madar-i-Shah ("Mother of the Shah") madrasa. The Chahar Bagh ("Four[-fold] Garden") is "a long avenue ... This elegant boulevard, some four kilometers long, was flanked by the palaces of the nobles, who were encouraged by the shah to add fine buildings in the new capital, and divided into two lanes by a central canal punctuated by fountains and cascades and planted with flowers and trees. It is a realization on an enormous scale and in three dimensions of the typical garden carpet" (Blair and Bloom, 185). "The Madrasa-yi Madar-i Shah [i.e. the Chahar Bagh madrasa], sited in an originally idyllic environment fronting the Chahar Bagh, injects a new dynamism into the traditional four-iwan layout by means of a large extra dome chamber in each of the diagonals (possibly to serve as lecture rooms in winter) in addition to those behind the iwans on the major axes. The cells, too, are unusual in their tripartite division: a vestibule and a terminal recess bracket the cell itself. The main prayer chamber here is not easily distinguishable from that of the Masjid-i-Shah, and the continued intermingling of the two forms in Iran is attested by several joint foundations in Qajar times" (Hillenbrand, 234-5). -MA (Sources: Blair, Sheila S., and Jonathan M. Bloom. The Art and Architecture of Islam: 1250–1800. New Haven and London: Yale University Press, 1994; Hillenbrand, Robert. Islamic Architecture: Form, function and meaning. New York: Columbia University Press, 1994.)