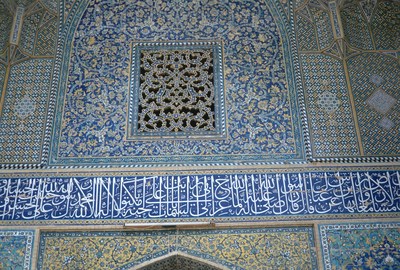 Exquisite decoration on the interior of the iwan opening onto the courtyard of one of the madrasas of the Shah Mosque. "The domed sanctuary [of the Shah Mosque] is flanked by rectangular chambers, which are covered by eight domes and serve as winter prayer halls. These halls in turn lead to rectangular courts surrounded by arcades, which serve as madrasas" (Blair and Bloom, 189). This is what Robert Hillenbrand says about these madrasas: "The two madrasas in the Masjid-i-Shah are longitudinally conceived and with their miniature garden courtyards make a delightfully bijou impression. They dispense with iwans and with prayer chambers, presumably because both features were readily at hand in the mosque proper. Instead they exploit the available space to the full for student cells" (Hillenbrand, 234). -MA (Sources: Blair, Sheila S., and Jonathan M. Bloom. The Art and Architecture of Islam: 1250–1800. New Haven and London: Yale University Press, 1994; Hillenbrand, Robert. Islamic Architecture: Form, function and meaning. New York: Columbia University Press, 1994.)