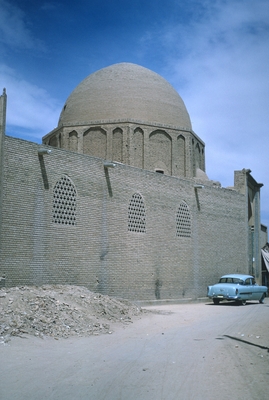 Exterior view of the northeastern dome of the Friday Mosque, an excellent example of the mastery of the Seljuks in brick construction. This dome was "built in 1088 by Taj al-Mulk [and] also had some royal function – perhaps the prince changed his clothes there before he entered the mosque, as its Qur'anic quotation (7:54) is rarely found in mosques and emphasizes the 'royal' character of God. Its asymmetrical openings further indicate that it served some ceremonial function of passage." Unfortunately, Baly did not photograph the breathtaking interior of the dome, which viewers are encouraged to look at. Some very good images are available in the entry on the mosque on archnet.org. -MA (Source: Oleg Grabar, Islamic Art and Architecture 650-1250, (New Haven and London: Yale University Press, 2001), 143.)