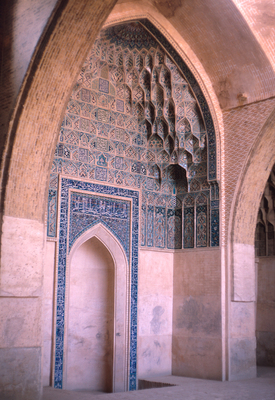 The central mihrab bay of the Muzaffarid Madrasa in the Friday Mosque, situated behind the southwest iwan. This madrasa is one of the "three additions to the original rectangular perimeter of the mosque that are incorporated into its space ... The Muzaffarid madrasa, locally known as the iwan of Umar (Suffa-i Umar), was erected on the southeast side of the Friday mosque in the fourteenth century and is particularly remarkable for its superb mosaic faience decoration in floral and geometric designs, compared by art historians to the works of the architects of the Timurid court. An inscription on the soffit of the iwan of the madrasa gives the name of the Muzaffarid Sultan Mahmud (reg. 1358-1374) as the patron of the addition to the Friday Mosque. The original extant section of the building consists of an iwan leading to a rectangular hall with transverse vaulting. The central bay of the qibla hall is covered with a lantern and encompasses a tile mosaic mihrab with muqarnas hood. While hazarbaf tiles in geometric patterns enliven the soffit of the iwan, the muqarnas above the mihrab is revetted with light blue, dark blue, black and white tiles as well as unglazed tiles." (Source: "Masjid-i Jami'" Archnet. Accessed April 07, 2017. https://archnet.org/sites/1621.)