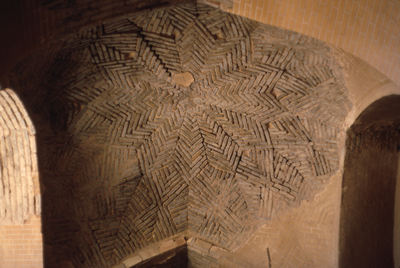 Exquisite brick vault in the southwestern hypostyle area of the Friday Mosque. Of the popularity of brick as a construction material in Iran (the mosque of Isfahan being one of its most famous examples), Oleg Grabar writes: "Ubiquitous as a material [in the 11th and 12th centuries] is high-quality baked brick ... It is significant for its appearance even in areas such as central and western Iran, where it has hitherto been rare, but chiefly for the fascinating variety of its uses. At one extreme the outer walls of Ribat Sharaf and the mosque of Isfahan show quite simple patterns of horizontal layers whose variations enable one to distinguish the practices of the masons from different provinces. The brick simply follows the lines and forms imposed by the architect and lends sobriety and strength. At the other extreme, on portals, on walls and vaults, on many mausoleums, and on some of the minarets, brick provided a rich luxurious surface. At times, it gives a sense of constantly moving lines and forms partly, at least, independent of the lines suggested by the architecture. At other times ... brickwork divides the building up into sections, each one with a different geometric design. These results were achieved in several different ways, but the brick used for decorative effect and to modify the impression of the wall is always the very brick used for construction ... Even the interstices between bricks have played their part in defining the brick wall. They were left free, thereby creating a surface pattern of light and shade. Or they were filled with stucco and contributed a decorative effect of their own." (Source: Oleg Grabar, Islamic Art and Architecture 650-1250, (New Haven and London: Yale University Press, 2001), 156.)