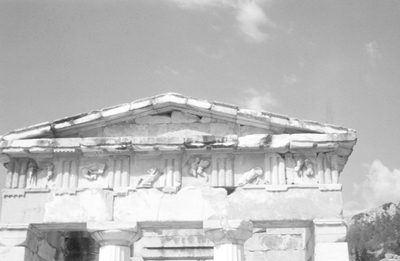 The entablature of the Athenian Treasury at Delphi. "The metopes depicted mythological themes of Theseus, Heracles, and Amazons in high relief. It is believed that two Athenian sculptors carved the metopes, each representing a distinct style or generation: one from the Archaic period, and one from the Severe style of classical art (the transition from Archaic to High Classical art). The walls of the treasury were inscribed with various texts, among which are the hymns to Apollo which included melody notation." (Source: Sakoulas, Thomas. "Treasury of the Athenians." Ancient-Greece.org. N.p., n.d. Web. 24 Feb. 2017.)