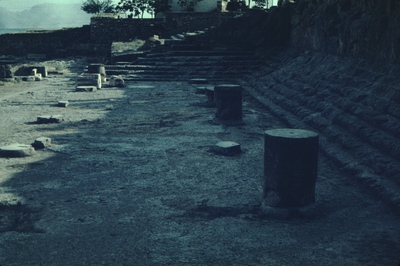 The remains of the Telesterion, the large temple that was located at the center of the sanctuary. Of the Telesterion, in his entry in the Ancient History Encyclopedia, Joshua J. Mark writes: "After drinking the Kykeon [a barley and mint beverage consumed by participants as part of the ritual] the participants entered the Telesterion, an underground `theatre', where the secret ritual took place. Most likely it was a symbolic re-enactment of the `death' and rebirth of Persephone which the initates watched and, perhaps, took some part in. Whatever happened in the Telesterion, those who entered in would come out the next morning radically changed. Virtually every important writer in antiquity, anyone who was `anyone', was an initiate of the Mysteries." -MA Source: Mark, Joshua J. "The Eleusinian Mysteries: The Rites of Demeter." Ancient History Encyclopedia. N.p., 18 Jan. 2012. Web. 17 Feb. 2017.