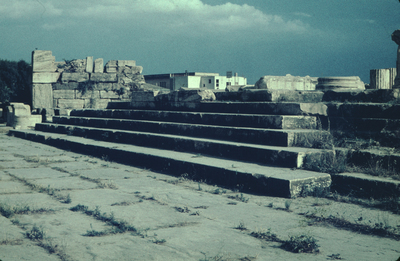 The ancient Sanctuary of Demeter, also considered to be the site of the legendary Eleusinian Mysteries which became one of the most important events of the Athenian religious calendar. The mysteries were supposed to be celebrations of the story of Demeter and her daughter Persephone. The initiates of the cult of this mystic ritual were "sworn to secrecy on pain of death" and hence there is very little information available of the details of this ritual. What is known, however, is that "those who participated in the mysteries were forever changed for the better and that they no longer feared death." It is also worth noting that both Socrates and Plato are considered to have been initiates as well, and the Eleusinian Mysteries have even been mentioned in Plato's famous dialogue Phaedo. -MA Source: Mark, Joshua J. "The Eleusinian Mysteries: The Rites of Demeter." Ancient History Encyclopedia. N.p., 18 Jan. 2012. Web. 17 Feb. 2017.