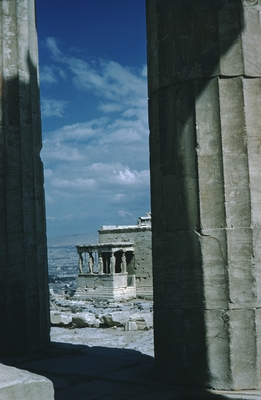 The famous Porch of the Maidens at the Erechtheum, seen through the columns of the Parthenon. Trachtenberg refers to the "enigmatic Erechtheum" as the "most exceptional Ionic building on the Acropolis" (94), and for multiple reasons. To give an idea to the reader of the significance of this building, the following passage from Trachtenberg is presented: "Built about 420 B.C., the temple was regarded with special veneration. Its site was particularly sacred, for it included the tomb of Cecrops, the legendary founder of Athens, the rock that preserved the mark of Poseidon's trident, and the spring that arose from it. In a walled area just to the west of the temple stood the sacred olive tree of Athena. The building's complexity of plans and levels can be partly understood from this complicated archaeology, as well as from its having housed not only a shrine to Athena Polias, but also altars to Poseidon, god of the sea; Hephaestus, god of fire; Erechtheus, a mythical king of Athens, who had battled unsuccessfully with the sea god; and Butes, brother of Erectheus and priest to Athena and Poseidon. Moreover, spoils from the Persians were kept in the temple, as well as the famous golden lamp of Callimachus, which burnt for a year without refilling and had a chimney in the form of a palm tree." (Source: Trachtenberg and Hyman, Architecture, from prehistory to post-modernism: the western tradition, 1986)