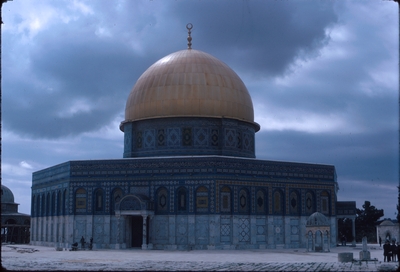 006- A close up view of the Dome of the Rock. The eight faces of the octagon are stone walls with seven shallow bays on the outside, the five central ones having windows in the form of plaster screens. The building has four doorways in the four cardinal directions, and all of them except the southern one are preceded by a brick barrel vault supported by four columns, as seen in this image. The lower half of the walls is covered in marble panels, while the upper half is covered with brilliant Turkish faience tiles, which in the 16th century replaced the mosaic that originally adorned this building. The tiles were removed in the renovation of 1960-62 and replaced by new ones that reproduced the 16th century versions.