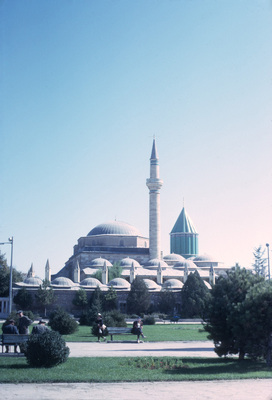 A distant view of the famous Mevlâna Museum in Konya, which houses the mausoleum of the reknown and revered Sufi mystic and poet Mevlana Celaleddin Rumi (1207-1273), also called the Mevlana. Few figures in the history of the Islamic mystical tradition are venerated more than the Mevlana. The famous Mevlevi order of Whirling Dervishes was founded by his followers after the Mevlana's death, and his mausoleum served as a center for these followers. Many muslims from around the world visit the mausoleum of this great sage to seek spiritual guidance and celebrate his legacy. The Mevlana's father, Baha al-Din Walad of Balkh (d. 1231), is also buried on the same site. The mausoleum acquired its monumental shape today after successive periods of constructions and additions over the years. The complex comprises different components: the mosque and semahane (Ritual Hall), the shrine, kitchens and cells for the Dervishes that were known to reside at the site, and a Takiyya courtyard, tombs and cemeteries. For a more detailed account of the Mevlana Museum, readers are referred to the article on the museum that can be found on archnet.org -MA | @archnet. "Mevlana Celaleddin Rumi Türbesi Ve Dergahi | Archnet." Mevlana Celaleddin Rumi Türbesi Ve Dergahi | Archnet. N.p., n.d. Web. 22 Sept. 2016.