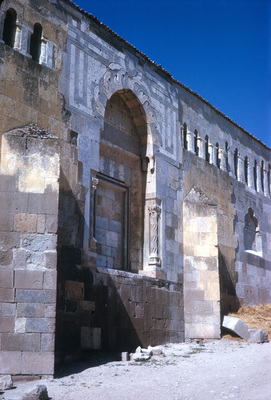 The north façade of the Alaeddin Camii, located on the hill which forms the citadel of Konya. The Alaeddin Camii was completed in 1220, and is the oldest known Selcuk mosque in Turkey. The entrance portal consists of polychrome masonry above the central arch, complemented by dark and light stone alternating in the overlacing voussoirs, which have been copied in the entrance portal of the Büyük Karatay Medresesi (see B42.001). However, in the latter, the polychrome tympanum has been replaced by a slightly truncated muqarnas decoration. Beneath the central arch are three horizontal bands of Arabic calligraphy. The columns built into the wall on the sides of the entrance have capitals that derive from the Corinthian style, and the ziz-zag column shafts are inspired by "salomonic columns" (Stierlin). Parts of the long facade consist of blocks of stone from Byzantine buildings, and the mosque overall follows an oblong, hypostyle plan, betraying the "continuity of classical tradition in Islamic prayer-halls" (Stierlin). -MA / Stierlin, Henri, and Anne Stierlin. Turkey, from the Selçuks to the Ottomans. Köln: Taschen, 1998. Print. @archnet. "Alaeddin Külliyesi | Archnet." Alaeddin Külliyesi | Archnet. N.p., n.d. Web. 14 Sept. 2016.