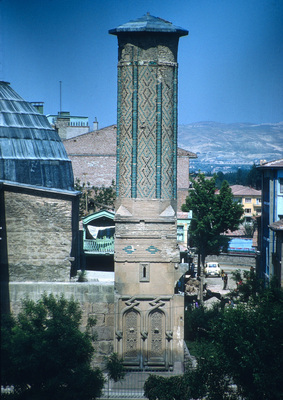 The İnce Minareli Medrese receives its name from its minaret which was once much longer than it is now. It lost most of its upper section in 1901 when it was struck by lightning, and has been restored since then. It originally had two balconies rising on a square masonry shaft, which was later converted to an octagon brick base. The shaft above the base has alternating segmental and angular sides, which are separated by reeds and decorated with diagonally-coursed glazed brick ends producing blue-lined geometrical lozenges. (for detailed account of the madrasah, see B42.014.) -MA "Ince Minare Madrasa." Muslim Heritage. N.p., n.d. Web. 08 Sept. 2016.