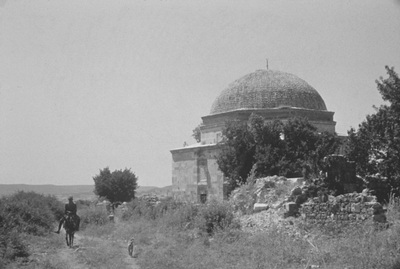 The Ilyas Bey Mosque, located in the renowned archaeological site of Miletos (ancient Ionian city), the present-day town of Balat, Aydin province, Turkey. Built in the very early fourteenth century, the mosque forms part of the larger Isa Bey Complex, which includes a madrasa and two hamams, and is named after its patron Şücaeddin [Shuja‘ al-Din] İlyas Bey (r. AH 805–27 / AD 1402–24). The mosque and the madrasa are part of the same broad-walled garden, and share the same courtyard. The Ilyas Bey mosque is square in plan (approximately 18 by 18 metres) with one large dome about 14 metres in diameter and made of brick. The walls of the mosque are covered with re-used marble slabs. -MA (Source: Şakir Çakmak "Ilyas Bey Complex" in Discover Islamic Art, Museum With No Frontiers, 2017. 2017. http://www.discoverislamicart.org/database_item.php?id=monuments;ISL;tr;Mon01;10;en)