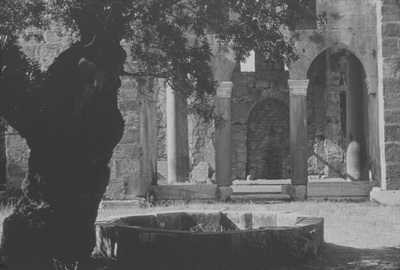 An image of the courtyard of the Isa Bey Mosque (for general account of the mosque, see B41.059), exhibiting the fountain situated in the centre of the courtyard (behind the triple-arched gateway), which was probably also used by worshippers to perform ablution. In the background, the northern end of the courtyard can be seen, which forms the entrance to the prayer hall — the mihrab is also visible in the very end. Note that the few images of the Isa Bey Mosque in this collection are from the middle of the 20th century. Since then, the mosque has undergone considerable renovation and repair (in the 1970s and then in 2005). The northern end of the courtyard today is very different. The prayer halls and the courtyard stand separated by glass windows, and the interior of the hall has also been changed significantly. -MA