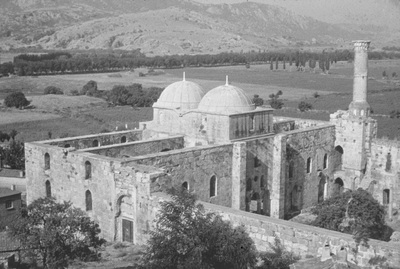 The Isa Bey Mosque, the oldest active mosque in Turkey and one of the most impressive remnants of Anatolian Turkish architecture, resting on the outskirts of the Ayasluğ Hills at Selçuk, İzmir. This "congregational mosque was built in 1375. According to an inscription over the main portal, it was the work of 'Ali b. al-Dimishqi for 'Isa b. Muhammad b. Aydin (r. 1360-90), the Aydinid sultan whose domain extended from western Anatolia to the Greek islands. Measuring some 53 by 57 meters, it has high walls constructed of rought-cut ashlars enclosing a spacious courtyard (27 by 35 meters) which is bordered on three sides by two-storied porticoes ... Much of the building material was undoubtedly salvaged from the ruins of Ephesus, to judge from the many spolia used, but other pieces were made specifically for the mosque ... Many features of the mosque, from its plan and elevation to the decoration with marble inlay, relate to earlier Syrian buildings, most notably the Umayyad mosque of Damascus. This Syrian connection is no surprise, given the origins of 'Ali b. al-Dimishqi (" 'Ali the son of the Damascene")" (Blair and Bloom, 135). Note that the Isa Bey Mosque has undergone considerable renovation and looks considerably different from what is visible in this image. -MA (Source: Blair, Sheila S., and Jonathan M. Bloom. The Art and Architecture of Islam: 1250–1800. New Haven and London: Yale University Press, 1994.)