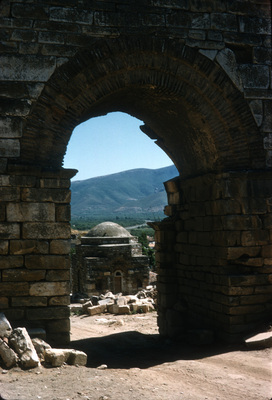 An archway in the ancient Greek city of Ephesus, located about three kilometers from modern-day Selçuk in İzmir Province, Turkey. Ephesus is a city of immense religious significance in the Roman Catholic tradition — it is believed by many to be the city in which the Virgin Mary spent her last years. The "House of the Virgin Mary," a shrine located in the vicinity of Ephesus, is considered to be the house where Mary was taken by Saint John. In addition, Ephesus is believed to be the city of the story of the Seven sleepers, which is not only a part of the Christian tradition but has also been mentioned in the Qur'an. -MA / "Ephesus." Wikipedia. Wikimedia Foundation. Web. 14 Apr. 2016.