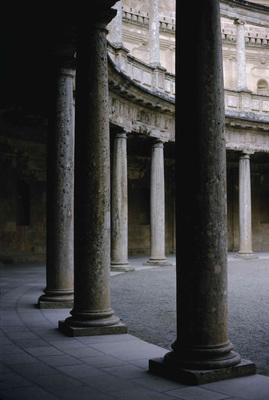 269- The peristyle circular courtyard in the palace of Charles V at the Alhambra in Granada, Spain. When Granada finally fell to Isabella and Ferdinand in 1492, the Alhambra was designated a royal palace for the Christian royalty—a status that it was to retain until 1868. When Charles V assumed kingship, he commissioned the architect Pedro Machuca to build a Renaissance style palace for him in the Alhambra in 1526. The work however was abandoned after several fruitless attempts at completion. It was only in the twentieth century that the work commissioned by Charles was completed. Due to its location in the middle of the Alhambra, the palace has traditionally been disparaged and criticized. However, in the words of Robert Irwin: “In fact it is a fine, imposing building, but on the wrong side.” For a general account of the Alhambra, please see slide B49.185. - SK