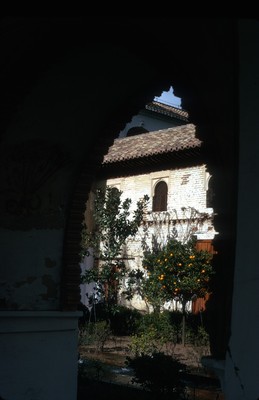 262- Pavilions overlooking the Generalife gardens in Granada, Spain. The primary royal garden in the vicinity of the Nasrid palaces of Alhambra is called ‘Generalife.’ Again, the origin of the word is disputed—some claim that it derives from the Arabic phrase ‘jannat al-arif’ which in English means ‘garden of the architect.’ The Generalife gardens are located to the east of the Alhambra, and was constructed around the 14th century as the royal summer palace or resting place for the Granadine royalty. Much of the horticultural configuration of the Generalife today derives from the 1920s rather than the original pre-modern plans. Most of the box-hedging, ivies, and flora is anachronistic, and so are the jet water-fountains (overflow fountains were preferred over projectile fountains). In Islamic gardens, flowers were not planted in beds but scattered over the gardens. Indeed, the architects of the Alhambra worked primarily with light and water, and all of these elements are featured prominently in the Generalife. For a general account of the Alhambra, please see slide B49.185. - SK