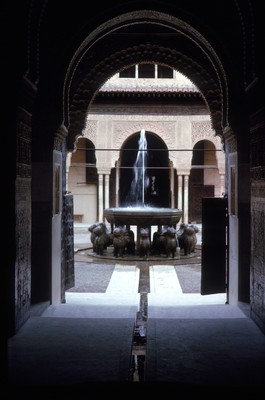 210- A view into the Court of the Lions. About this building, Robert Irwin in his book The Alhambra writes that ‘Though there is much of technical and historical interest to be said about the Court of the Lions, the first thing to be remarked is that it is, by common consent, one of the most beautiful buildings in the world, and there are many who would even go beyond that qualified judgment.’ [Robert Irwin, The Alhambra (London: Profile Books, 2004) 49.] The palace was built in the second half of the fourteenth century in the reign of Muhammad V. The central courtyard is traversed by water-channels with a water fountain in the center. This is in the form a basin below which stand the eponymous twelve stone lions. 124 slender columns establish a harmonious internal rhythm to the building. For a general account of the Alhambra, see slide B49.185. - SK