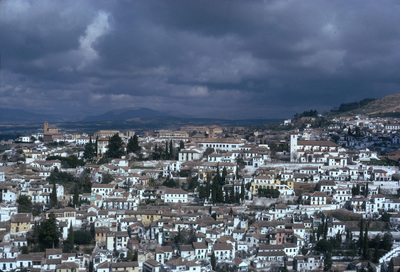 182- A view of the city of Granada in Southern Spain. While the kingdoms of Castile and Leon were consolidating their power as Muslim rule crumbled, a new Muslim kingdom was established by Muhammad ibn Nasr at Granada in 1238. In 1246, Muhammad ibn Nasr formally acknowledged the king of Castile as his overlord. Despite this, the Nasrids ruled their kingdom more or less independently, with little interference. This thus meant that Muslim rule in Spain would continue for another two centuries in the form of the Nasrids at Granada, until in 1492 when the last Nasrid ruler Muhammad XII (also known as ‘Boabdil’ in English) surrendered to Isabella of Castile and Ferdinand of Aragon. Granada’s chief claim to fame remains the Alhambra palace-complex. - SK