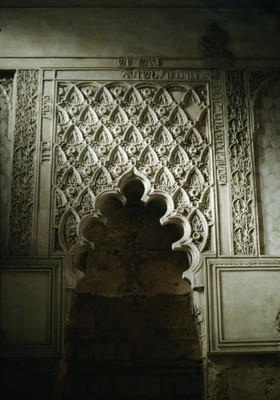 178- The west wall of the Synagogue of Cordoba, Spain. The synagogue is one of three synagogues left in Spain which survived the expulsion of the Jews in 1492. The synagogue was built in Mudejar style (Romanesque, Gothic, and Renaissance styles heavily influenced by Spanish-Islamic art and architecture—‘mudejar’ refers to those Muslims who stayed on in Spain and continued to work in Andalusian styles for non-Muslim patrons). The present image shows superb stucco work on the walls, which also show some Hebrew inscriptions.