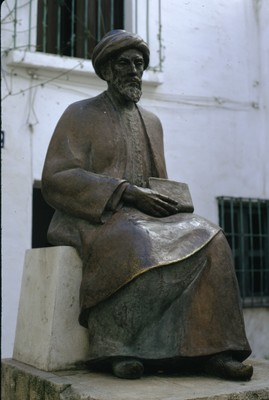 175- Statue of Sephardic Jewish Philosopher Maimonides in Juderia (the former Jewish quarter of Cordoba). Born in Cordoba, Maimonides became one of the most prolific Torah scholars and physicians of the middle ages, producing very famous works on a wide range of subjects, including the Mishneh Torah, The Guide for the Perplexed, and other works on Jewish law and ethics. He died in Fustat, Egypt, and was later buried in Tiberius, Israel.