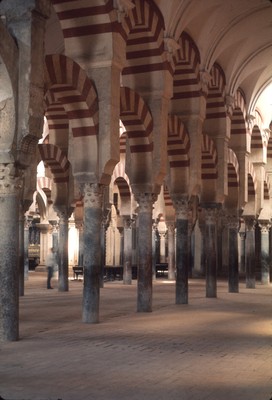 112- The Great Mosque of Cordoba is considered to be the one of the most remarkable monuments of Umayyad Spain and a masterpiece of medieval architecture. It was built in several phases, beginning with Abd al-Rahman I (784-86), and with perhaps the most significant additions by al-Hakam II. The present courtyard of the hypostyle mosque depicts the ‘forest of columns’ that this building is so famous for. One of the most important innovations was the use of double-tiered arches, which elegantly supported the roof and increased the height as well. Jerilynn Dodds has described the effect of this in equally powerful words: “…the columns that support the hypostyle hall explode into a labyrinthine elevation of superimposed horseshoe shaped arches composed of voussoirs in which deep red brick and white stone alternate. This carnivalesque solution converts a basic building type that is repetitious and by nature somewhat monotonous into a wild three-dimensional maze, a hall of mirrors in which the constant echo of arches and unruly staccato of colors confuse the viewer…” – SK