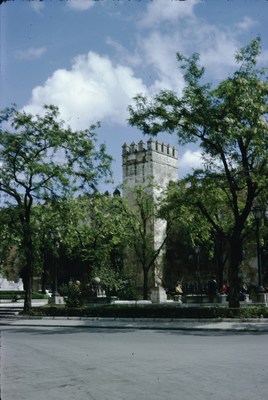 91- The Alcazar of Seville (derived from the Arabic al-Qasr), was built in Almohad times before the Christians conquered the city and the Castilian kings, especially Pedro I (also known as ‘Peter the Cruel’), gave it the form that it has now. The Alcazar is thus an example of mudejar architecture, or Christian architecture constructed in the Moorish style by Andalusian craftsmen. For the Alcazar, craftsmen were brought in particular from Toledo or Granada. –SK