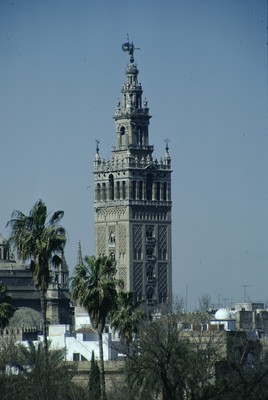 82- The Giralda bell tower is part of the Seville Cathedral, and was built by the Almohad dynasty of Islamic Spain at their capital of Seville in 1198. Almohad architecture is known for its tall square minarets, and the Giralda is one of the best examples. Originally, the Giralda was the minaret of a mosque, but the mosque was converted into a cathedral after the Christian conquest in 1248. (See next slide.) -SK