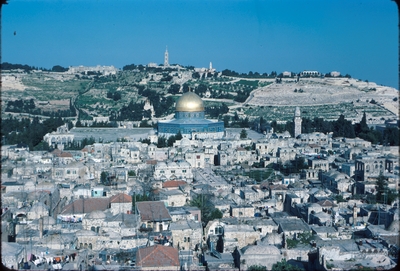 003- Another view of the Dome of the Rock from afar. Various explanations have been forwarded to explain the original purpose of the building. Among the most widely circulated ones are three: the caliph Abd al Malik meant to divert the qiblah from Mecca to Jerusalem. The second, which is still accepted today among Muslims, is that the building was a commemorative structure, a sort of martyrium, to mark Muhammad’s Night-Journey (isra) and Ascension (m’iraj). The most historically sound explanation of the origins of the building lies in its statement of the victory of Islam over the Sassanians and the Byzantines, and as a display of Ummayad power. It was only later that the political connotations faded away and the religious ones accrued in their stead.