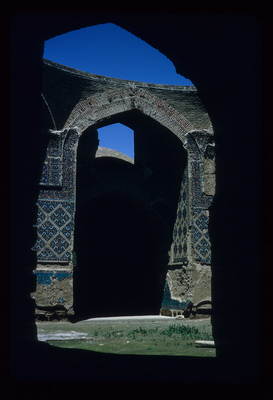 View of vault from inside the dome chamber in the Blue Mosque. The Blue Mosque (other names are the Masjid-i-Kabud, Masjid-e-Muzaffariyah, and Goy Masjid) was constructed at Tabriz in 1465 under the patronage of Saliha Khanum, the daughter of Jahan Shah Qara Qoyunlu. It is one of the few completely roofed mosques in Iran, a result of the harshly cold climate of Tabriz. The mosque was known within Iran as the “Firuzeh-e-Islam” or the Turqoise of Islam, because of the incredibly rich decoration that sheathes the mosque, predominantly in dark blue. Lisa Golombek and Donald Wilber are of the opinion that “the mosaic faience decoration displays a mastery of the decorative arts never surpassed in later monuments.” The dome and the minarets have since been destroyed by a great earthquake in 1776.