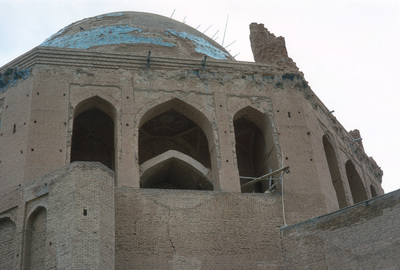 The second-storey galleries open outwards, to later inspire buildings such as the Taj Mahal, among others. Robert Byron’s comments are worth mentioning here: “…this gigantic memorial of the Mongol empire bears witness to that Central Asian virility which produced, under the Seljuks, the Mongols, and the Timurids, the happiest inspirations of Persian architecture. Certainly, this is façade architecture: the prototype of the Taj and a hundred other shrines. But it still breathes power and content, while its offspring achieve only scenic refinement. It has the audacity of true invention; the graces are sacrificed to the idea, and the result, imperfect as it may be, represents the triumph of idea over technical limitations. Much great architecture is of this kind. One thinks of Brunelleschi.” (For a general account of the Tomb of Uljaitu, see B45.332)