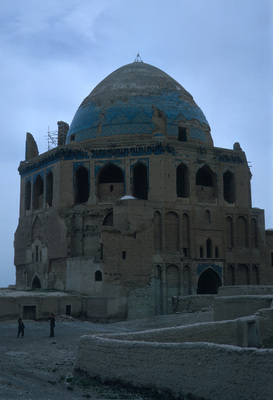 The Tomb of Uljaitu was begun in 1305 and completed in 1313 at the new imperial capital of Sultaniya on the orders of the Mongol/Ilkhanid ruler by the same name. Octagonal in form, the mausoleum is crowned by a beautifully poised dome covered in blue faience tile. A minaret rose from each of the eight angles, framing the dome like a diadem- these are visible only in their ruined forms. Arthur Upham Pope, perhaps the greatest student of Persian architecture waxes eulogies for one of “Iran’s supreme architectural achievements.” Showing the Mongol predilection for magnificent scale, the building is also remarkable for its graceful sophistication.