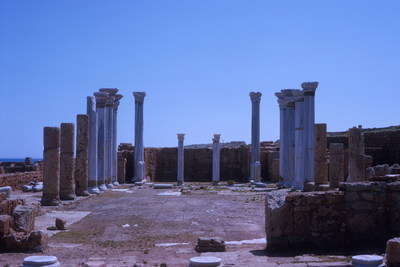 "Apollonia (Marsa Susa), Cyrene's port, was the second of the five cities of the Pentapolis—which became Hexapolis with the addition of Hadrianopolis in the reign of Antoninus Pius" (MacKendrick, 131). Shown here are the remains of what is called the 'East Church.' The church, "the largest Christian edifice in the city, was built over a Hellenistic or Roman building. Two phases, fifth and sixth-century, are recognized. To the latter phase belongs a mosaic from the south transept, showing Noah releasing the dove from the ark. There was an elegant clover-leaf baptistery, marble-revetted and perhaps cupolaed; there is provision for heating the baptismal water—Cyrenaicans were notorious for their luxury" (MacKendrick, 132). (Source: MacKendrick, Paul. The North African Stones Speak. Chapel Hill: The University of North Carolina Press, 1980.)