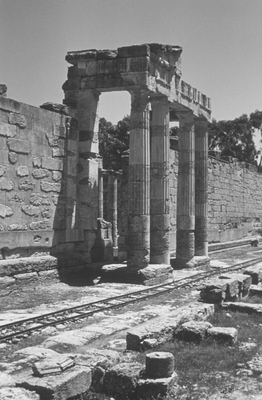 One of the "two tetrastyle, gabled porches" (140, Ballance and Perkins) that served as entrances to the Caesareum at Cyrene. "At Cyrene a building identified as a gymnasium of the second century B.C. was remodelled and rededicated to Augustus as a Caesareum, or Kaisareion … If this gymnasium is correctly equated with the Ptolemaion of several local inscriptions, the transformation was both simple and logical. It comprised a rectangular open space, some 170 by 265 feet (51 by 81 m.), surrounded by Doric porticoes, with a series of chambers opening off one long side, which were later rebuilt as a basilica of which the whole of one end was occupied by a large semicircular exedra" (Perkins, 366). (Sources: Perkins, J. B. Ward. Roman Imperial Architecture. New York, NY: Penguin Books, 1981; Perkins, J. B. Ward, M. H. Ballance, and J. M. Reynolds. "The Caesareum at Cyrene and the Basilica at Cremna, with a Note on the Inscriptions of the Caesareum by J. M. Reynolds." Papers of the British School at Rome 26 (1958): 137-94.)