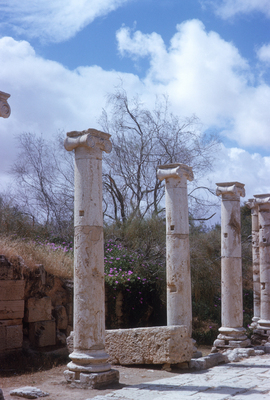 Elegant columns of the Ionic order, situated along the cardo (Latin term for a north-south street going through an ancient Roman city) of Leptis Magna. Leptis Magna is one of the three coastal cities of western Libya, the other two being Oea (now Tripoli) and Sabratha. All three together are referred to as Tripolitania. Leptis magna was "founded by Phoenicians from Tyre at the end of 7th century BCE, where the Wadi Lebda meets the Mediterranean Sea ... During the Third Punic War, Lepcis Magna became an ally of the Romans, which made it a favored and important city within the Roman Empire." The city's plan consists of many important monuments typical of Roman cities, such as a theater, a market, baths, and multiple historic arches. -MA (Source: Carinemahy. "Leptis Magna." Ancient History Encyclopedia. Accessed February 02, 2018. https://www.ancient.eu/Lepcis_Magna/.)