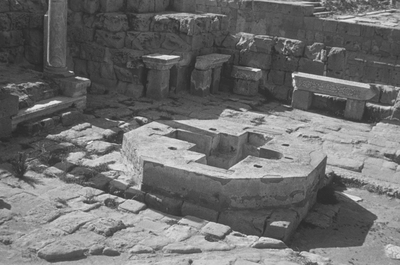 The baptistery of one of the basilicas in the Sabratha complex. "Northwest of the theater are ruins of two Christian basilicas of the fourth through sixth centuries. The spacious scale of these basilicas gives evidence of a once large Christian population. Ruins also remain of a large Christian basilica built near the sea during the time of Justinian in the sixth century. The larger basilica has a baptistery connected with the church; the smaller basilica has a separate baptistery. We know that Sabratha was at one time a bishopric and that its bishops attended church councils. Christian architecture was entering its maturing form that would prevail for centuries to come" (Oden, 268). (Source: Oden, Thomas C. Early Libyan Christianity: Uncovering a North African Tradition. Downers Grove, IL: InterVarsity Press, 1987. https://books.google.com/books?id=0YqIz1b15ZIC&printsec=frontcover&source=gbs_ge_summary_r&cad=0#v=onepage&q&f=false (accessed August 29, 2005).)