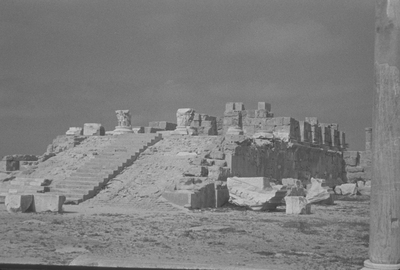 The remains of the Temple of Antonine at the ancient city of Sabratha. The temple "was surrounded on three sides by a colonnade of columns carrying Corinthian capitals, and behind the southwest colonnade a grouping of rooms and a hall formed an impressive entranceway from the street. Against the northeast wall of the courtyard rose a high podium fronted by a flight of marble steps rising up to the temple proper. Four Corinthian columns supporting a marble entablature and pediment spanned the front of the temple, while a single column behind each of the end columns gave depth to the porch. The cella itself was ornamented on the exterior sides and front with fluted pilasters, the side pilasters being modeled in stucco while those in front were carved of marble" (50). For more information on Sabratha, see B04.030. (Source: Matthews, Kenneth D., and Alfred W. Cook. Cities in the sand: Leptis Magna and Sabratha in Roman Africa. Philadelphia: Univ. of Pennsylvania Press, 1957.)