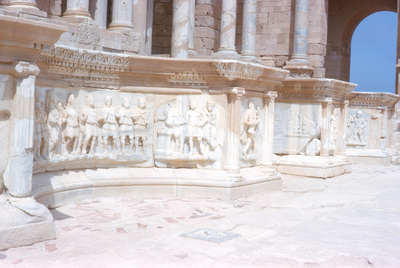 Exquisite relief sculpture at the Sabratha theater. "The central exedra lines up with the porta regia, the royal door of the scaenae frons [see B04.031-2], and is thus the most significant scene of the relief (Cat. 11); indeed, this scene is the most frequently published of the frieze. The exedra is divided into three scenes, the two outer scenes actually portraying two parts of one sacrifice. On the left is a depiction of a libation at an altar attended by two men, the principal sacrificer and a camillus who offers the jug and patera. Caputo identified the central figure as Septimius Severus, the young man to his right as Caracalla, and the older man to his left as his son-in-law Plautinus. The scene on the right of the exedra depicts the second part of the sacrificial ritual: an ox to be slaughtered being led to an altar covered with fruit, bread, and pinecones, accompanied by two victimarii. Damage to the faces of the figures precludes recognition of portrait types, but similarities to other reliefs depicting Septimius Severus and his family, as mentioned below, add credence to the figures’ identification as such." On the same relief, Paul Mackendrick writes: "Rome and Sabratha—personified, with turreted crown—clasp hands in a scene of sacrifice, with ox, acolyte, and figures that have been identified as Septimius Severus, Caracalla, and the legate Plautianus" (MacKendrick, 170). (Sources: MacKendrick, Paul. The North African Stones Speak. Chapel Hill: The University of North Carolina Press, 1980; Raabe, Ashleigh W. "Imagining Roman-ness: A Study of the Theater Reliefs at Sabratha." Masters Thesis. University of North Carolina Chapel Hill, 2007.)