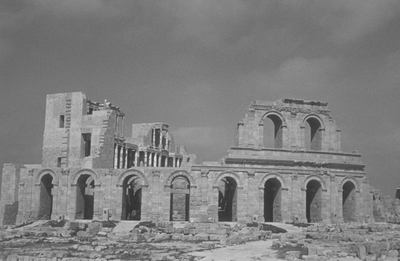 The famous Roman theater at Sabratha. "Situated on the Tripolitanian coast to the west of modern Tripoli, Sabratha was one of the ancient triad of cities, consisting of Sabratha, Oea (Tripoli), and Leptis Magna, which gave the name of Tripolitana to this territory. Like its two sister settlements Sabratha was in origin a mere Phoenician trading center, dating perhaps to the seventh century B.C. The vestiges of this early outpost, situated between the harbor and the Forum, offer no evidence of solid permanent structures, but rather consist of the remains of Punic storage jars and Greek vases. This would indicate that the site was merely one where occasional traders stopped or might even have resided during the good sailing season" (Matthews, 48). (Source: Matthews, Kenneth D., and Alfred W. Cook. Cities in the sand: Leptis Magna and Sabratha in Roman Africa. Philadelphia: Univ. of Pennsylvania Press, 1957.)