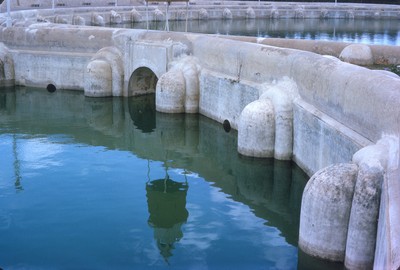 Close view of a section of the Aghlabid basins. "The Aghlabid reservoirs, of which only two survive, were part of a group of about 15 reservoirs, located outside the city walls, which supplied the town with water. They are considered to be among the most important hydraulic works of the Muslim world. They provoked the admiration of travellers and led to the town being given the name 'city of the cisterns'. They were filled by draining rainwater as well as water from the tributaries of the wadi Merguelli, which flow in the surrounding lowlands. Its waters were harnessed by small dams and a conveyance canal which transported it to the small pool. In 350 (961), the Fatimid Caliph al-Mu'izz built an aqueduct that brought water from the Shreshira springs, located 40 km to the west of Kairoun" (discoverislamicart.org). "The Aghlabid Cisterns are the only two remaining pools of a 15 pool water system that was among the most advanced in the world at the time. They were constructed under the orders of Prince Abu Ibrahim Ahmad in 862/248 AH under the supervision of Khalaf al-Fata, his emancipated slave. The Aghlabid Pools are composed of a small pool called all-Fisqiya (the reservoir), in the shape of a 17-sided polygon, and a larger cistern that is 4.8 meters deep. Sediments are allowed to settle out of the water in the small pool until a certain level is reached. At that point, it is transferred to the large pool through an opening known as esarh (the outlet). The water comes from rain and the wadi Merguell via a set of small dams and a canal" (archnet). (Sources: "Aghlabid Basins." Archnet. Accessed January 23, 2018. https://archnet.org/sites/4189; Jamila Binous "Aghlabid Reservoirs" in Discover Islamic Art, Museum With No Frontiers, 2018. 2018. http://www.discoverislamicart.org/database_item.php?id=monument;ISL;tn;Mon01;9;en)